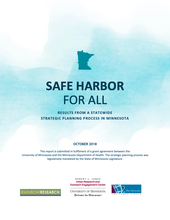 The Safe Harbor for All Strategic Planning Process Report identifies potential impacts of policy changes on the safety, health, dignity and justice for adults involved in transactional sex, including victims of trafficking, and exploitation. Based on input from 294 stakeholders from across Minnesota, the report sheds light on the intended and unintended harms—including lack of housing and police protection— to adults who are trafficked for sex or are involved in transactional sex.

What is the Safe Harbor for All Strategic Planning Process Report?

In 2011, the Minnesota State Legislature enacted the Safe Harbor for Sexually Exploited Youth Act, which decriminalized youth under age 18 who are trafficked, victims of commercial sexual exploitation, or involved in any form of transactional sex. The legislation created a statewide system of regional "navigators" with expanded and enhanced housing, services and supports called the No Wrong Door initiative. State funding of the initiative currently provides more than $13 million biannually to state agencies and nonprofit service providers.  In 2017, the initiative expanded eligibility for services and housing to young people through age 24.

In 2017, the Legislature mandated a strategic planning process to explore the potential expansion of Minnesota’s Safe Harbor Act and help decide next steps in seeking the most appropriate and effective response for adults impacted by commercial sexual exploitation and sex trading. The Legislature funded a grant to the Minnesota Department of Health (MDH), which awarded the project to a three-agency team led by the University of Minnesota's Urban Research and Outreach-Engagement Center (UROC) and which included the The Advocates for Human Rights and Rainbow Research. The result —the Safe Harbor For All Strategic Planning Process—included extensive stakeholder input, analysis of existing data, and review of the literature.

What were the Research Methods used in the Strategic Planning Process?

UROC led the Strategic Planning Team with partners the Advocates for Human Rights and Rainbow Research. The project sought to document and capture the opinions of a broad range of stakeholder groups through a community-engaged research process. The team used a purposeful sampling technique to connect with a broad and comprehensive range of stakeholders.  Data was collected from 290 stakeholders across Minnesota, with emphasis on the following key groups:

The Strategic Planning Team collected data via in-person, one-on-one interviews and small group meetings throughout the state, as well as through phone interviews and an online survey. The process was guided by a 35-member Process Advisory Group made up of the stakeholders listed above, with more than 60 percent of the group having lived experience in transactional sex. A full description of the process can be found in the report's pages 16-27.

What does "Lived Experience" Mean?

Language related to prostitution—or more broadly speaking, transactional sex—can be complicated, confusing and stigmatizing. Minnesota prostitution laws define a “prostitute” as someone who is hired or agrees to be hired to engage in prostitution and a “patron” as someone who pays or hires a “prostitute.” The Safe Harbor for All Strategic Planning Process report does not use these terms, as stakeholder input unanimously identified the term “prostitute” as derogatory and stigmatizing. Additionally, most stakeholders suggested the term “patron” does not accurately convey the behavior of purchasing sex. The nuances of language, terminology, and legal models related to prostitution and transactional sex are important because the words used can convey respect, inclusion, and understanding or stigma and harm. The researchers used the term “lived experience” for all people who provide sex directly to a sex buyer. People with lived experience include victims and survivors of sex trafficking and exploitation, independent providers, and sex workers.

What are the Report's Key Findings?

What Recommendations does the Report Make?

The Strategic Planning Team proposes 19 recommendations that call for changes to Minnesota’s criminal and civil statutes, as well as focused planning and more state funding to expand and enhance services, supports and housing for people with lived experience.  The recommendations are divided into five sections: approach and philosophy; relevant criminal issues; availability and access to prevention and intervention services; tribal sovereignty and indigenous communities; and training, reforms, and evaluation.

What Stakeholder Groups were Mandated for Inclusion?

•    Victims and survivors of trafficking and exploitation;
•    Social service providers who work with victims and survivors;
•    People with tribal affiliation;
•    Staff and participants of crime victim coalitions,
•    Participants in human trafficking task forces;
•    Prosecutors and public defenders;
•    Police and probation officers;
•    Staff from organizations that address intersecting issues; and
•    Researchers in the field.

Who Participated in the Process?

We asked individuals to identify professional roles they have that are related to their knowledge about transactional sex. Participants were able to select more than one role. A total of 233 people identified a professional role. Fifty-six (56) people identified both a professional role related to transactional sex and lived experience. Professional roles included outreach workers, social workers, police officers (including  detectives and investigators), prosecutors, public health professionals, attorneys, therapists, public defenders/defense attorneys, probation officers, academics, hotel/hospitality workers, nurses, members of the faith community, philanthropy and judges. Approximately half of participants said they had some connection to one of Minnesota’s many human trafficking task forces and 12% identified themselves as formally affiliated with a tribal agency or entity.

A complete description of who participated is provided in the full report.

How was the Process Funded?

The Legislature and Minnesota Department of Health provided $67,000 for the strategic planning process. The agency partners provided significant additional resources that included in-kind time, recruitment and coordination of volunteers, and $33,417 in additional funds contributed and raised by UROC.